21 Really Cool Things To Do In Death Valley

Death Valley constitutes much of Death Valley National Park, which straddles the California-Nevada border. It sounds like the kind of place that must be avoided at all costs, but it's actually a beautiful area that should be on everyone's bucket list. Although Death Valley is known as one of the hottest places on earth, temperatures are quite mild from November through March. There are many things to see in Death Valley that can't be experienced anywhere else in the world.

Here are 21 really cool things to do in Death Valley: 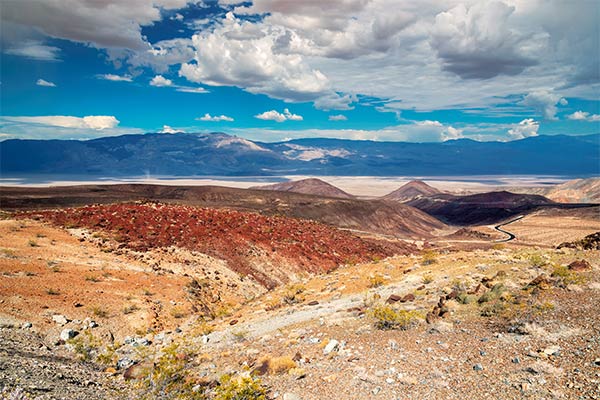 1. It's in the Mohave Desert

A close look at the Mojave Desert will reveal its natural beauty, especially at dusk or dawn when the desert comes alive with color. Iconic Joshua trees break up the horizon, and unique flowers bloom from the cacti. Additionally, the purples and oranges of the sun are magnified as it travels across the sky. Visitors are able to experience a number of Mohave Desert adventures from wildflower viewing to rock climbing.

Death Valley National Park's geology includes erosion, crustal sinking, volcanic eruptions and fault activity. It is unique because it includes igneous rock, metamorphic and sedimentary rock. Ancient seas covered the area and deposited layers of marine sediment, including fossil evidence of marine animals. Mountain ranges emerged and the valley floor sunk from faults in the earth's crust. Lakes covered much of the area until the last ice age when evaporation left only layers of mud salt on the basin floor. 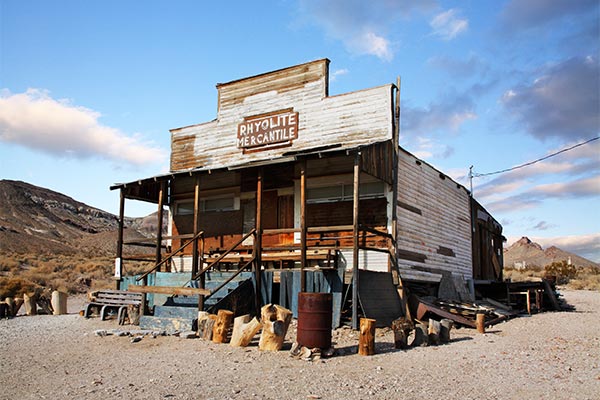 Rhyolite is a ghost town in Nye County, Nevada, near the eastern edge of Death Valley. The town began as a gold mining camp that sprung up in the early 20th century. During its peak, the Rhyolite population was estimated at 3,500 to 5,000 people. There were miners, developers and service providers. The town was affluent enough to have multiple train lines, newspapers, swimming pools and hospitals. It also had an opera, a symphony and more than 50 saloons.

Just outside Rhyolite Ghost Town is the Goldwell Open Air Museum, an outdoor sculpture park. It's one of the unique Death Valley things to do. A group of prominent Belgian artists, led by Albert Szukalski, chose the Mojave Desert as a place to make work freely. They created the self-described art situation consisting of seven huge outdoor sculptures. Originally designed to last two years, Szukalski's life-size, ghostly representation of "The Last Supper" continues to serve as the "genesis" piece at the museum.

Hells Gate is a scenic point of interest at the intersection of Beatty Road and Daylight Pass Road. The name originated from a mule teamster who noticed the reaction of his mules when they left the cool temperatures of Boundary Canyon. When they entered the hotter regions near the buttes, his animals would shake their heads and balk at the heat. He ascribed their reaction to the fact that they had "stuck their noses through the gates of hell."

Visitors with limited mobility looking for things to do in Death Valley should visit the half-mile interpretive trail along the Salt Creek boardwalk. This ADA-accessible wooden boardwalk loop has minimal changes in elevation. The trail is open year-round, but the water only flows from November through May. Spring offers views of flowing saltwater, patches of salt, lush green vegetation and even flowers. Other Death Valley ADA-accessible trails are available at Harmony Borax Works and Badwater Salt Flat.

One of the unique things to do in Death Valley is to visit in the spring when the Death Valley Pupfish are spawning. The Salt Creek Pupfish live in two isolated areas of Death Valley National Park. This is the only place in the world where they exist. The pupfish are believed to be remnants of a larger ecosystem of fish species originally living in Lake Manly, which dried up at the end of the late ice age leaving Death Valley.

Mining in Death Valley has been a boom to bust experience for more than 140 years. Gold and silver originally drew miners to the region, but the most profitable mines produced borax and talc. Visitors will find numerous remnants of the region's mining industry, including tunnels and abandoned mine shafts. Keane Wonder Mine, a historic gold mine, still has aerial tramway towers and terminals intact. Other popular sites include Eureka Mine, Warm Springs Mine and the Wildrose Charcoal Kilns. 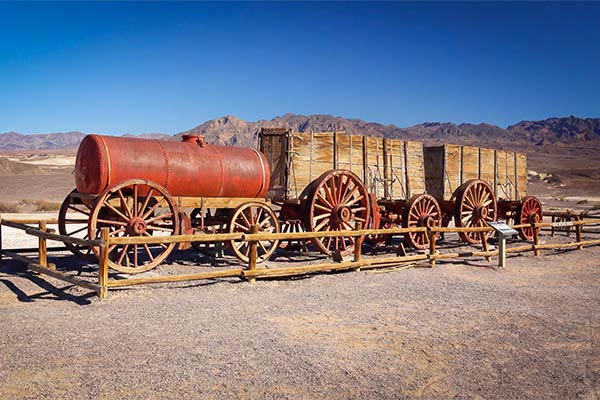 Harmony Borax Works, on the National Register of Historic Places, is located just north of Furnace Creek. In 1881, miners discovered Borax here and by early 1884 it was being fully processed. At that time, the operation employed 40 men who produced three tons of borax daily. The operation faced obstacles in how to get its finished product to market. The solution was to move it in double wagons powered by twenty-mule teams. This is where the term "20 Mule Team Borax" came from.

The park's Furnace Creek Visitor Center is located on California Highway 190, about 30 miles from Death Valley Junction and 24 miles from Stovepipe Wells Village. Get expert advice from rangers on how to explore the largest national park in the Lower 48. View a 20-minute park film shown throughout the day. Explore geology exhibits and a well-stocked bookstore. During winter, rangers present a wide variety of walks, talks and slide presentations about the area's natural and cultural history. 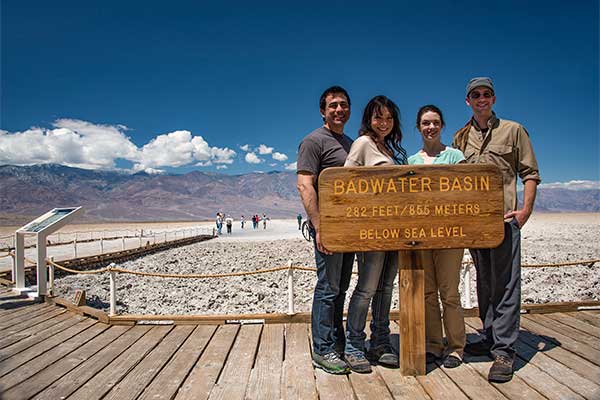 At 282 feet below sea level, Badwater Basin is the lowest point in North America, This surreal landscape of vast salt flats appears endless. In cooler months, guests can walk out onto the salt polygons that make Death Valley famous. From the parking lot, a sea-level sign sits 282 feet above on the adjacent mountainside. For visitors, this really puts things into perspective as to how low they are.

Heavy rainstorms can flood the valley floor, coating the salt pan with a thin sheet of standing water. Newly formed lakes don't last long, given the extreme evaporation rate. This spot derives its name from a small, spring-fed pool that emerges at the base of the mountain. Legend has it that a miner named it "Badwater" because his mule would not drink the salty water.

Death Valley hiking options abound but few constructed trails. Most routes are cross-country, up canyons or along ridges. The best time to hike is November through March. Many trails lack markers, pick up a trail map at the visitor center. Natural Bridge Canyon Trail, near Badwater Basin, is a great way to beat the heat. It passes through a shaded canyon and ends at a dry waterfall. Geological features include a natural stone arch, chutes, faults and mud drippings. 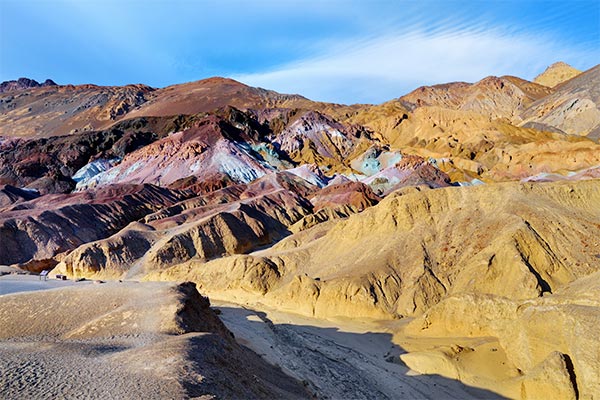 Artist's Drive is a one-way, nine-mile paved loop that crosses a sloping mountainside along the face of the Black Mountains. This scenic drive traveling from south to north passes an area dubbed the Artist's Palette. This section of hillside gets its name from a variety of colors including red, pink, yellow, turquoise, green and purple. The vibrant hues are due to various oxidized metals in the rocks.

The Devil's Golf Course gets its name from a 1934 guidebook that described the area's terrain as so rough that "only the Devil could play golf here." Its jagged surface is composed of large halite salt crystals that are forever changing. On a warm day, visitors can hear a metallic cracking sound as the salt pinnacles expand and contract. Devil's Golf Course is accessible via a half-mile dirt road between Badwater and Furnace Creek 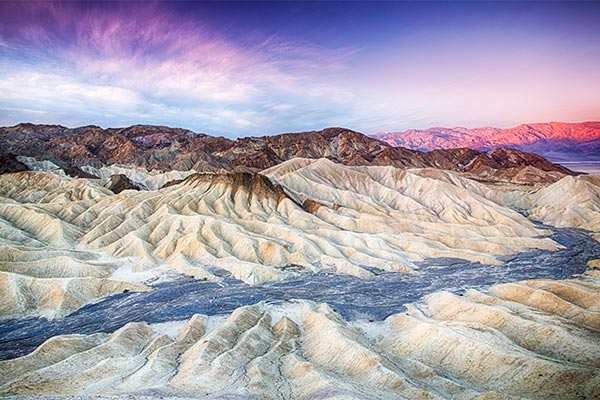 Zabriskie Point is famous for its erosional landscape and golden-colored hues. It is a spectacular spot for sunrise. The Pacific Coast Borax Company built this popular vista in the 1920s and named it after its vice president, Cristian Zabriskie. The site was intended as a way stop for automobile travelers to see Manly Beacon, a prominent landmark in Death Valley’s “Badlands.” It remains one of the most visited spots in the park. Wildflowers are abundant in fall and winter.

The colorful, eroded landscape at Zabriskie Point can be seen up close by way of Twenty Mule Team Canyon Road. This is a one-way, unpaved track that winds through the hills for 2.5 miles. The road is well-maintained and passable by car or truck. The road provides amazing views across the badlands all the way to the salt flats in the center of Death Valley. Nearby, there are old mine tunnels, twisting ravines and patches of mineralized rock. It's a must-do for Star Wars fans. Scenes from Star Wars Episode VI: Return of the Jedi were filmed here.

Dante's View is the most breathtaking vantage point in Death Valley National Park. At 5,476 feet, it offers a birds-eye view of the southern Death Valley basin and mountains across from it. The viewpoint is ADA-accessible. Visitors can also walk several paths. One leads to a panoramic view, another leads to a rest area with picnic tables. On very clear days, the highest and lowest points in the contiguous U.S. can be seen: Mount Whitney (14,505 ft) and Badwater Basin (-282 ft). 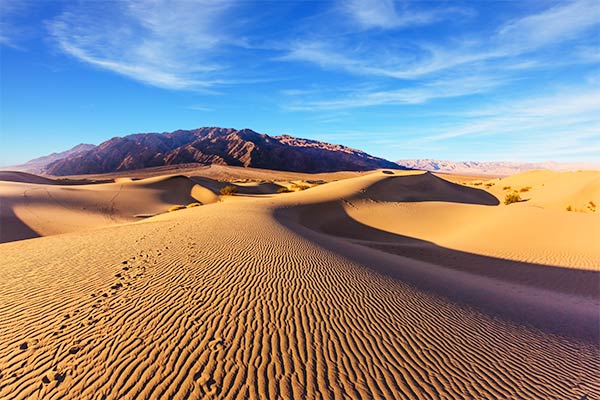 Death Valley visitors are often surprised to see that it’s not covered with sand. After all, it is a desert. Some sand dunes do exist and they display the familiar shadowed ripples and graceful curves associated with desert images. Mesquite Flat Sand Dunes, near Stovepipe Wells, are the easiest ones to access. Park visitors can see three different types of dunes here: star-shaped, linear and crescent-shaped.

Ubehebe Crater is a large volcanic crater a half-mile wide and 600 feet deep. Hundreds of years ago, a massive volcanic explosion occurred when magma mixed with an underground spring. The paved parking lot directly overlooks the crater and three trial offer other views. The Ubeheb Crater Loop is a flat, but moderate 1.8 mile trail winding around the crater's rim. The wind, heat and cinder-sand mix can wear hikers out. 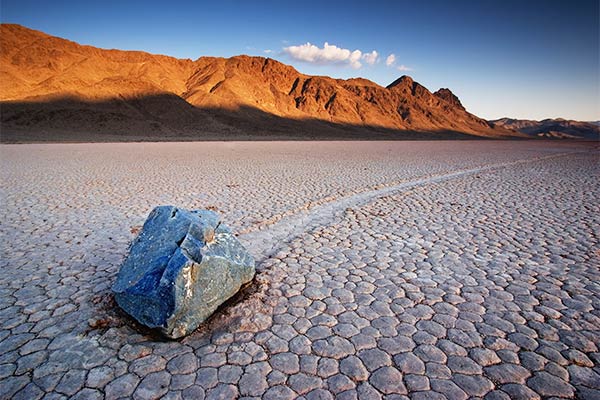 Racetrack Playa, also known as The Racetrack, is stunningly beautiful and one of the most bizarre places in the park. Here, large heavy rocks weighing up to 700 lbs mysteriously glide over the dry, muddy surface leaving imprinted trails behind them. Many theories exist as to how these rocks move. One theory postulates that, occasionally, thin sheets of ice form and melt, pushing the rocks along. Getting here requires a high-clearance, 4x4 vehicle.

Visiting the Father Crowley Overlook at Rainbow Canyon is also a really cool thing to do in Death Valley. It lies on the western outskirts of the park. This area is a training ground for military pilots practicing advanced maneuvers. Take a picnic and chairs, settle down near the parking lot and wait to see fighter jets zooming through the narrow canyon.

Death Valley National Park is so vast it's impossible to cover all these really cool things in a day. Some companies offer Death Valley Tours from Las Vegas. Pink® Jeep® Tours provides a Premium Journey: Death Valley Tour that includes several of these locations and a comfort stop at the famed "Area 51 Alien Center."