Most people agree that simply seeing a picture of the Grand Canyon is not enough to capture the famous landmark’s beauty. You must experience this natural wonder in person, which is why over five million people tour this bucket-list destination every year. If you’re thinking about taking a vacation to this Arizona hot spot, you’ll want to know about regional weather conditions that’ll impact your journey.

Here are some weather-related facts about the Grand Canyon that’ll help you to make informed decisions about your upcoming trip.

The answer to the question “what is Grand Canyon weather like” depends on many factors. The canyon stretches 277 miles long, up to 18 miles wide and more than a mile (6,000 feet) deep. It has a semi-arid climate, with some sections of the upper plateau covered by forests and its bottom marked by a series of desert basins. The most highly visited areas of the Canyon include the South Rim, North Rim, and West Rim. Each one has its own distinctive weather that varies with the seasons.

While the National Park Service (NPS) posts general climate conditions of these areas on its website, you’ll want to get more precise info about the weather in the places you plan to visit by checking with the National Weather Service. Knowing the weather conditions for a specific area will help you decide whether you want to tent camp or stay at a lodge, what types of activities or tours you might enjoy, or even if you want to alter the timing of your route. It’ll also help you to choose which items to pack for your journey.

The Grand Canyon Makes Its Own Weather

The vastness of the Grand Canyon and its steep changes in elevation enable it to create its own weather! The canyon rises to an elevation of 8,000 feet on the North Rim and drops to 2,000 feet above sea level at Phantom Ranch. Sudden changes in elevation impact temperature and precipitation, so the weather can vary dramatically depending on your location and the time of the year that you visit.

The air currents and heat in the Canyon also affect the weather. Temperature inversions occasionally happen here, when a layer of warm air sits on top of cold air. This phenomenon gives rise to fog and pulls the clouds below the rim, making you feel as if you are standing on top of the world. It’s truly a spectacular sight with the canyon floating in a sea of clouds. 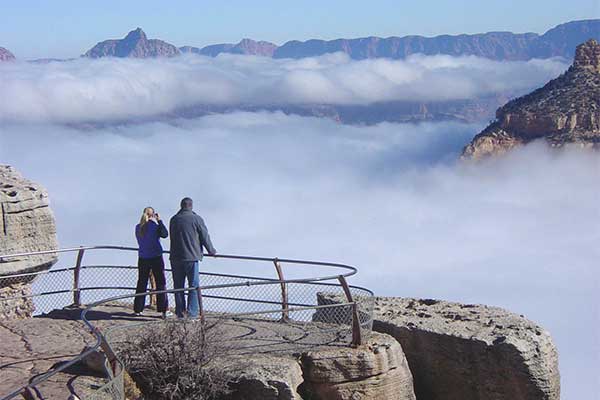 What Is the Best Time of Year to Visit the Grand Canyon?

The best time of the year to visit the Grand Canyon depends on your planned activities. Popular things to do in the area range from Jeep tours with amazing views to stargazing. Other activities include mule rides, hiking, camping, river rafting, horseback riding and even cross-country skiing in winter. Besides confirming weather conditions find out from the NPS if your chosen section is open during the time that you plan to visit.

The Grand Canyon’s South Rim is its most visited section because of its amenities and relatively mild weather conditions. During the summer, you can expect average daytime temperatures to reach 85° and drop to 55°F at night. Winter weather at the South Rim is a little less predictable. According to the NPS, you could experience snow, icy trails and road closures during this time.

The Grand Canyon West Rim is located on the Hualapai Indian reservation and home of the Grand Canyon Skywalk. The area’s hot, dry summer weather is ideal for Colorado River rafting and floating. It is near the put-in for many of the Canyon’s river running expeditions. Early spring and late fall temperatures in the 70s and 80s make trips to the West Rim’s Skywalk glass bridge and other Native American tourist sites comfortable.

Temperatures throughout the Canyon can fluctuate greatly from month to month. Knowing the monthly weather patterns of the Grand Canyon’s South, North and West Rims helps you to plan a one-of-a-kind vacation to this famous landmark.

Grand Canyon weather in March brings a temperature range between 51°F and 25°F at the South Rim. The North Rim has temperatures between 44°F and 21°F. The West Rim, which has temperatures that are between 82°F and 56°F, is much warmer than the other two Grand Canyon sections. Wildflower season begins to bloom in mid-March and continues through May.

Grand Canyon Weather in May

June brings temperatures between 81°F and 47°F to the South Rim. Mild temperatures that range from 73°F to 40°F will greet you during June at the North Rim. Grand Canyon weather in June presents the West Rim with daytime temperatures of 101°F and evening temperatures of 72°F. Mid-June also brings Arizona’s monsoon season to the Grand Canyon, which can produce strong winds, thunder, severe lightning and torrential rains. Flash flooding can occur in low-lying areas. 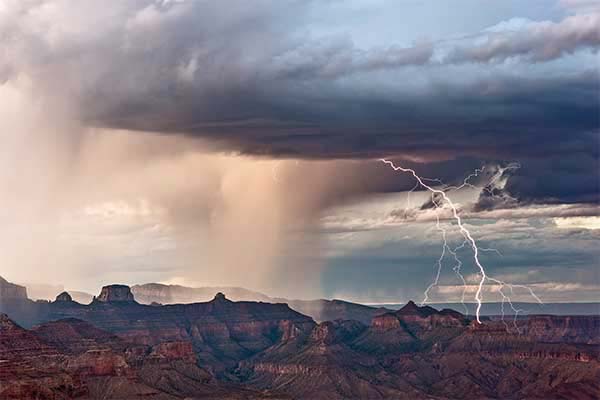 The weather in July brings the hottest climate to the region, and you can expect South Rim temperatures to range from 84°F during the day to 54°F at night. Make the most of nice weather at the North Rim by enjoying temperatures between 77°F and 46°F. Be ready for daytime temperatures that reach 106°F and nightly temperatures of 78°F when you visit the West Rim in July. 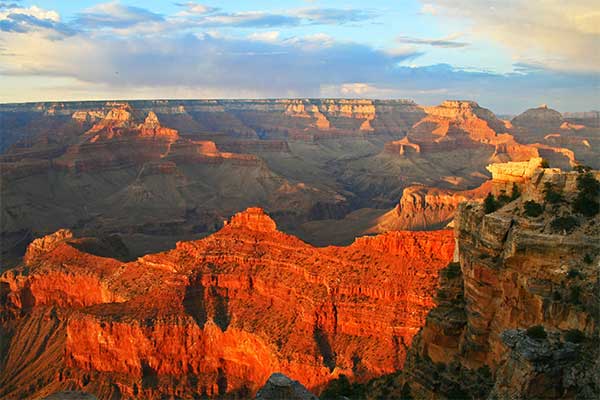 In October, South Rim hikers and trail runners find great weather with temperatures between 65°F during the day and 36°F at evening. Grand Canyon weather in October marks the end of the season at the North Rim, with most visitor services and facilities closing in mid-October. During this time, North Rim daytime temperatures reach 59°F and plummet to 31°F at night. The North Rim is also one of Arizona’s best bets for fall colors. Prepare for a pleasant stay at the West Rim during October with temperatures that range from 84°F during the day to 58°F at night

Grand Canyon weather conditions can make or break your vacation plans. Preparing for all types of atmospheric conditions helps to ensure your group’s safety and well-being when traveling through rugged destinations. Pink Jeep operates year-round tours at the Grand Canyon departing from Sedona, Las Vegas and in Tusayan.