What happens in Vegas, usually happens on the Strip. That's the common conception, anyway, and a lot of visitors buy into it. There is undoubtedly a lot of action on the Strip, not to mention great food, so why would anyone bother going anywhere else when hunger strikes? The answer to that will delight anyone who's tired of the same-old-same-old and looking to sample something new on their next visit to Sin City. Read on for tips on some of the best off-Strip restaurants that will stimulate the palate and go easier on the wallet than most Strip joints (pun intended).

"S+W," as it's locally known, advertises itself as a "Neighborhood Cookery," but the cuisine is far from ordinary. The adventurous menu seeks to give new meaning to the term "New American," as it represents a fusion of the old world and the new—or, more appropriately, the now. Dive into a bento box, share a plate of bone marrow dumplings, indulge in the wood-roasted lamb neck with chanterelle mushrooms and crispy shallots, and wash it all down with one of the marvelous and inventive house cocktails. Sparrow+Wolf was designated Best New Restaurant of the Year by Desert Companion Magazine in December 2017. Closed Tuesdays. For more information and a look at their menu, visit sparrowandwolflv.com. 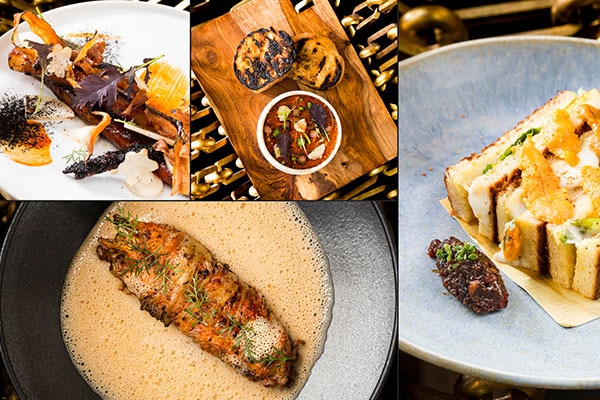 This hip and happening tapas bar is known for its collection of hot, chilled, vegetarian and gluten-free tapas, sharable paellas, house-made sangrias, and vibrant atmosphere. On the cold side, the artichoke toasts, tuna tartare and chorizo plate hit all the bases; for something hot, go for the baked tetilla cheese fondue or the addictive Firefly fries. The scene is so lively, visitors will never miss the excitement of the Strip. Firefly now has two locations: Firefly Paradise at 3824 Paradise Road and Firefly Southwest at 7355 S. Buffalo Drive in Southwest Las Vegas. Check out both Firefly menus.

With its exposed wood beams, Art Deco lighting and stainless steel barstools, Carson Kitchen epitomizes the 21st century neighborhood watering hole. Ensconced in the former John E. Carson hotel, the space invites diners to re-live the old glory days of Vegas. Chef Kerry Simon received high kudos for his New American cuisine when the spot opened in 2014. Today, the spirit of that legendary chef is still very much alive within the walls of Carson Kitchen. To learn more and view their menu, visit carsonkitchen.com/las. 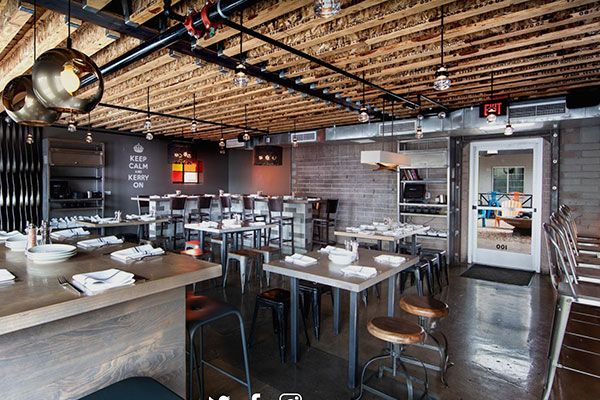 Sometimes, there's nothing like a good, heaping plate of meat. Rollin Smoke BBQ is used to serving huge crowds—in fact, catering is one of their specialties. The staff won't be fazed by larger parties and there's plenty of food to go around. Guests can choose between combo plates, "racks and birds" or order their barbecue by the pound. Traditional sides such as cornbread, coleslaw, baked beans, hush puppies and collard greens round out the menu. Save room for the peach cobbler or banana pudding with vanilla wafers for dessert. To learn more, check out rollinsmokebarbeque.com.

The lengthy banquette at Honey Salt presents a clear invitation for diners to settle in and make new friends, and that's likely just what will happen to anyone lucky enough to snag a spot here. Chef Kim Canteenwalla and his wife, restauranteur Elizabeth Blau, are devoted to presenting the best of farm-to-table inspired cuisine in an inviting setting. Start off by sampling the Margherita flatbread, move forward to the grilled Scottish salmon with English pea risotto and crispy pancetta, and don't forget to sample one of the creative and elegant side dishes. Honey Salt also offers a roster of special events. 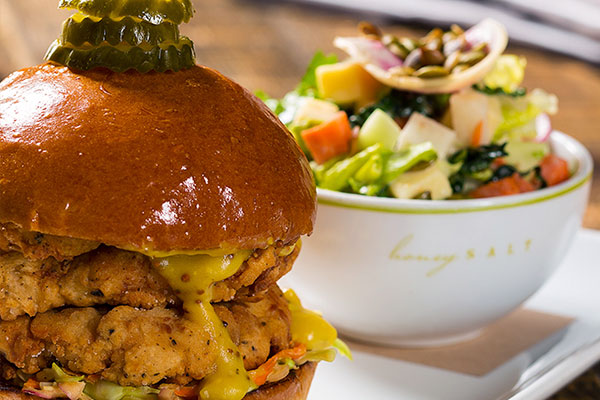 This upscale steakhouse should be saved for a big hurrah on the last night, as it will provide an extravagant experience diners will want to savor all the way home. The restaurant has several locations, but Sin City is the best backdrop for a meal this decadent and rich. From the foie gras and caviar service to the hand-cut bone-in ribeye, to the pecan-crusted butterscotch cheesecake, every aspect of the meal is tailored to hit each of the five senses. Check out the Prime Pair Sunday experience for a special prix-fixe treat.

Not to be confused with the 2016 animated comedy of the same name, Sausagefest goes heavy on the meat and light on the pretense. With a vibe that recalls a 1980s-era rolling rink, this joint began life as a food truck in 2011 before moving the party indoors. Pay a visit to their Facebook page to get the motor revved up for that next sausage fix.

Not the typical neighborhood Chinese restaurant, but oh so much better. This haven, offering Asian fusion cuisine with a spectacularly unfussy presentation, is one of the best restaurants to be found anywhere in Las Vegas. Beginning in 2015 from a perfect plate of chicken rice, Flock & Fowl makes all of its own sauces in house, including two different types of soy sauce. The honey butter chicken wings put the buffalo-style ones to shame, and the hangar steak with soy glaze and frites is flavorful and meaty—the epitome of a great steak. To be led further into temptation, check out their menu. 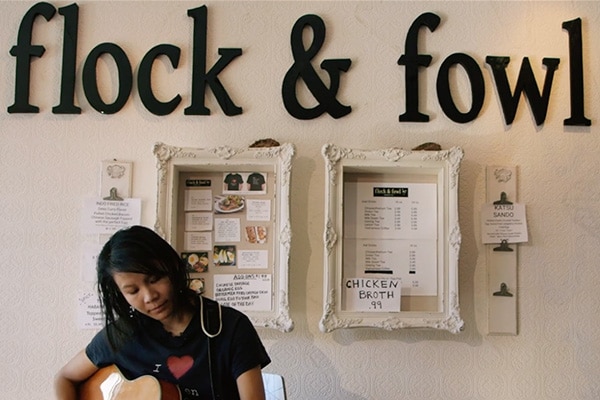 The sleek, modern décor of this casual Italian eatery won't earn any comparisons to the checkered red-and-white tablecloth clichés of yore—and that's a good thing. Mamma Olivia offers good, stick-to-your-ribs comfort food at affordable prices, with familiar options such as gnocchi alla Bolognese, spaghetti Pomodoro and linguine with clams. Go ahead and enjoy a little laid-back carb-loading before heading back to the casinos—the calories don't count on vacation. Don't forget to take advantage of Happy Hour, Mon-Sat from 1-6 pm. The restaurant is closed on Sundays.

The tour guides at Pink® Jeep® Tours Las Vegas are locals and experts in everything Vegas from alluring history to the best shows and restaurants. They’re thrilled to share and recommend the very best of Las Vegas to their guests. The guides are so much more than drivers and the tours more than sightseeing. Experience Las Vegas on a guided excursion, from the Strip to surrounding areas, with Pink Jeep Tours.