Visiting Grand Canyon National Park on the first day of the new year is a grand reminder that the canyon stands testament to the slow and unstoppable passage of time, to which each and all of us are bound. It also reminds us that change is inevitable, whether measured in days or decades, eras or eons of time. Even every few minutes, the shifting angle of the sun changes the appearance of the canyon during a winter stroll along the Trail of Time at the south rim.

But for all its grandeur, the canyon is not a fixed landmark but a work still in progress, its immense buttresses slowly giving way to the agents of time that act on its slopes and sediments, its riverbeds and bedrocks. We, too, must yield to the effects of time. As the new year stretches out before us, what can we learn from the canyon’s noble and patient surrender? 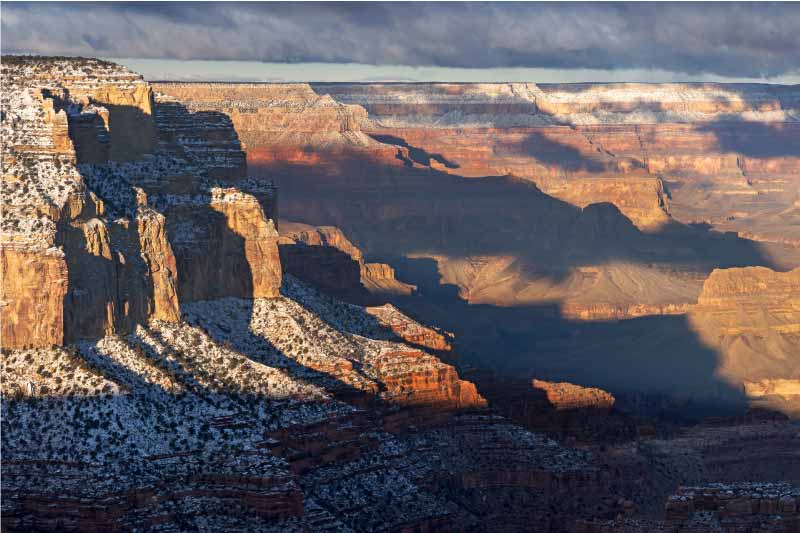 Shadows of clouds dance alongside shadows of canyon walls below Maricopa Point. 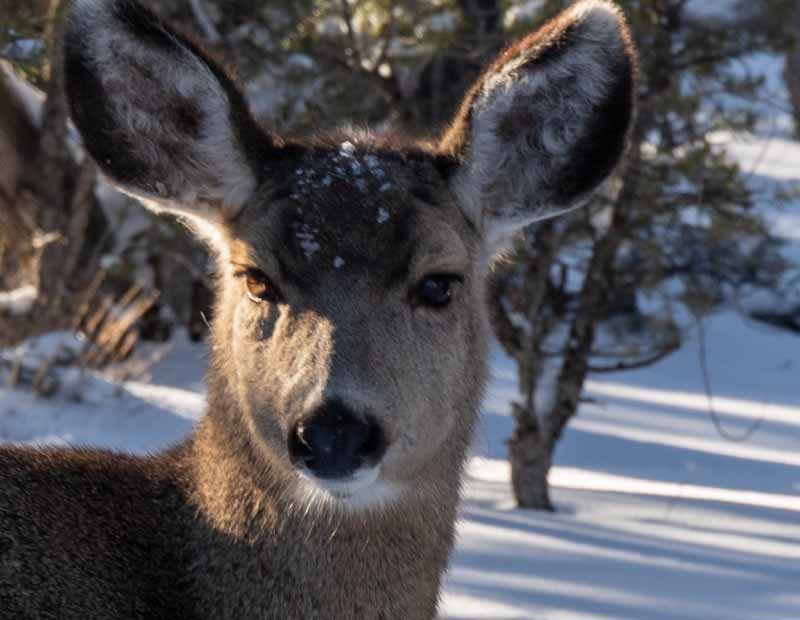 A mule deer, its distinctive ears alert, turns toward the sound of a camera shutter and the parka-clad human behind it. 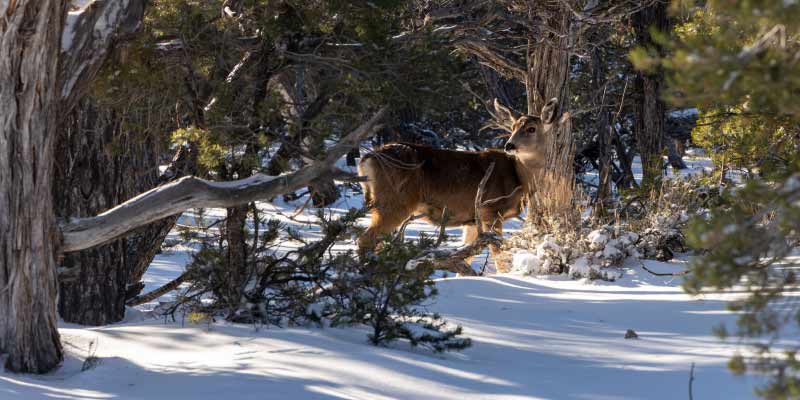 It and a friend were foraging for food near the canyon’s rim. 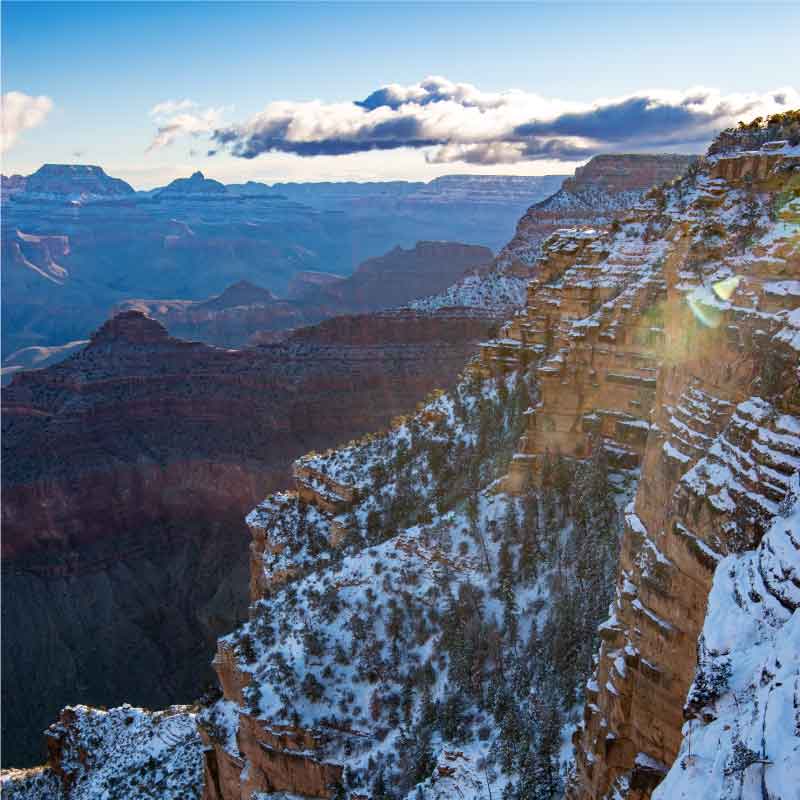 Farther along, sunlight breaks into the canyon near Yavapai Point. 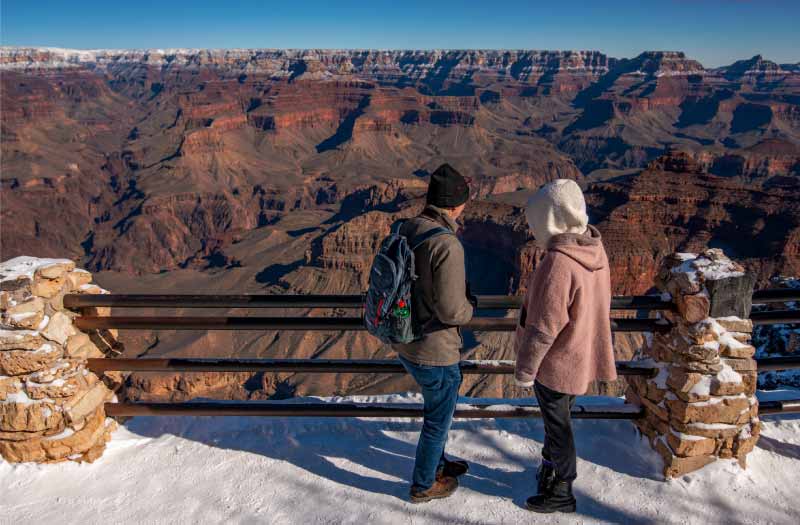 The once-empty trail has begun to awaken with visitors. Looking out from Yavapai Point, we share their enthrall. 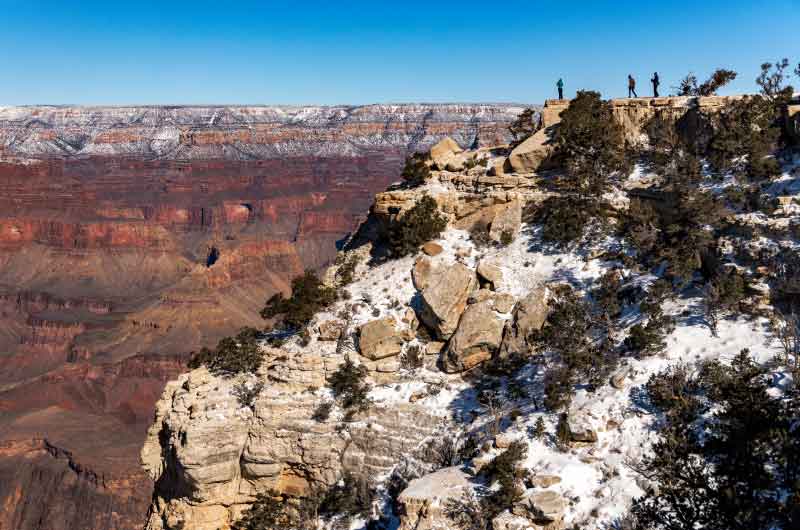 How is it that feeling tiny amidst the canyon’s expanse lifts our minds and spirits to soar? 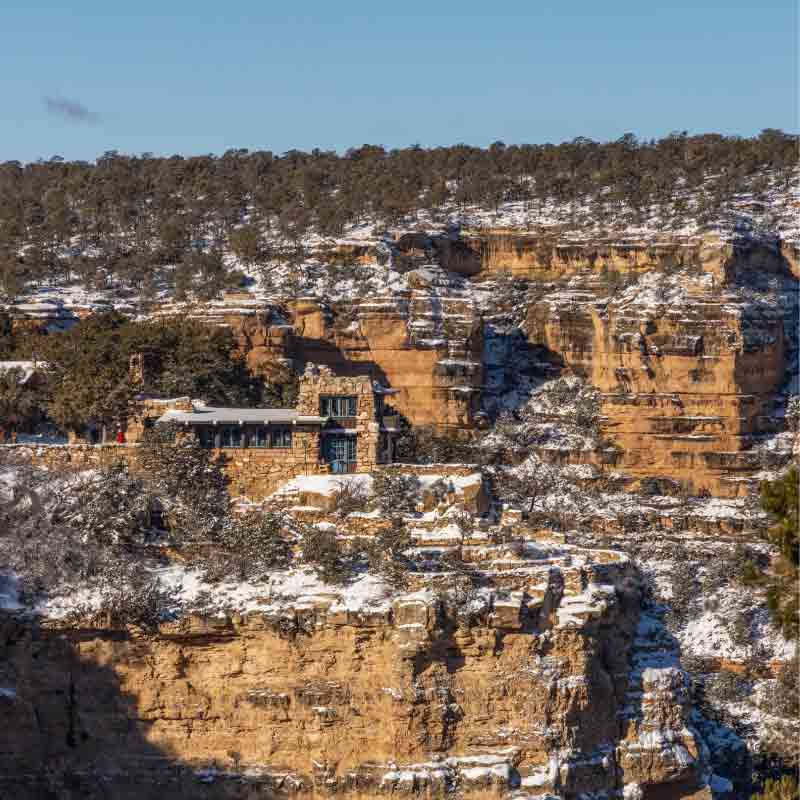 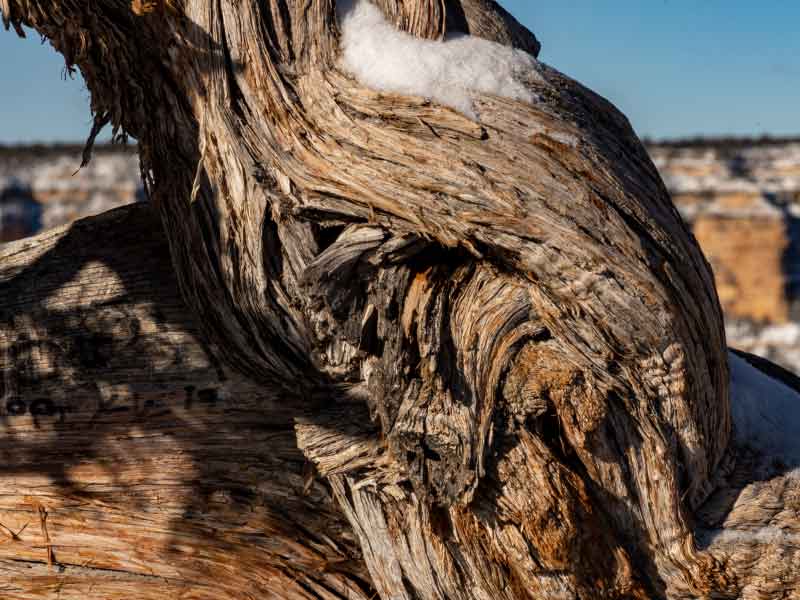 Even the trees sing silent hymns to the march of time. The notes of a grand symphony are recorded in their rings. 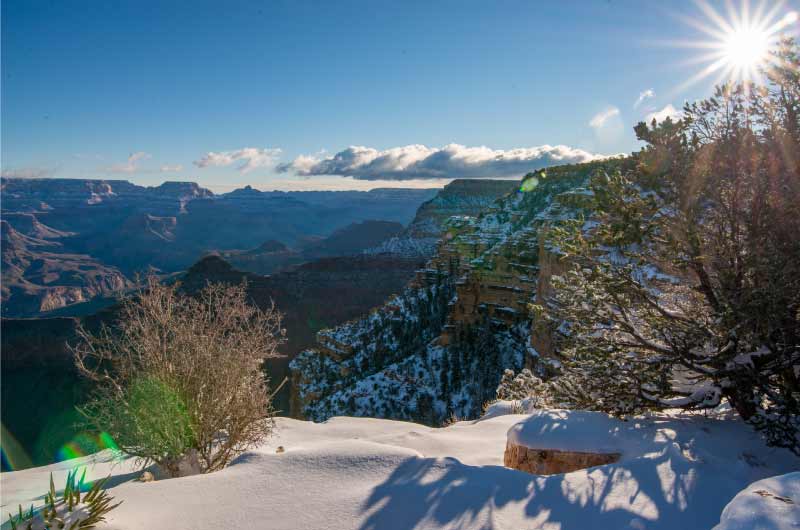 The serenity of fresh snow, yet undisturbed by the feathered or footed. 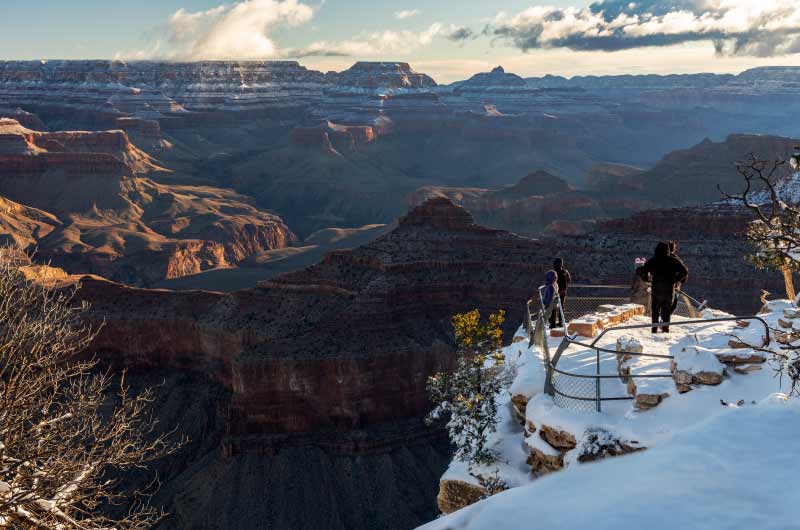 Passing by others lost in thought, there is a shared reverence for solitude. 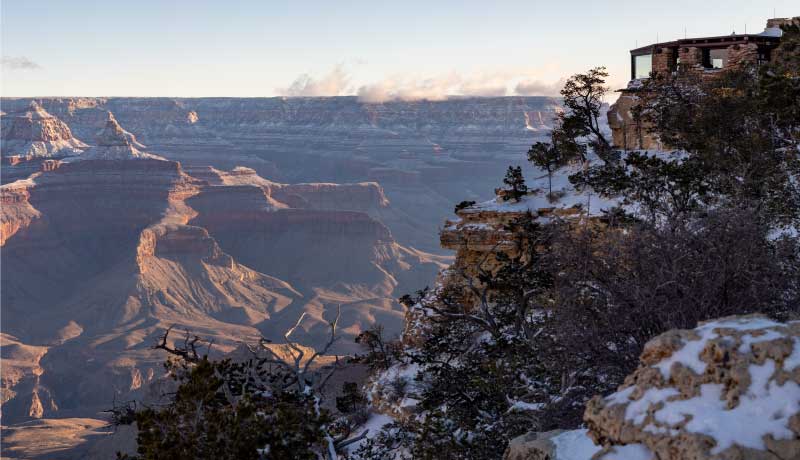 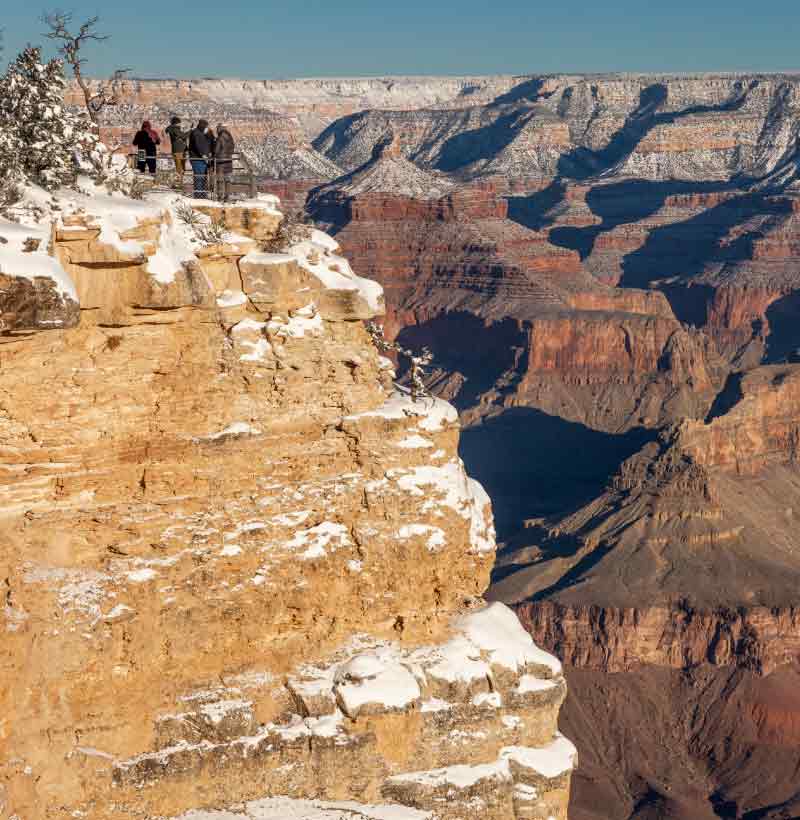 The canyon exists on a scale that is difficult to comprehend. Whatever size it is imagined to be, in reality, it is bigger still. 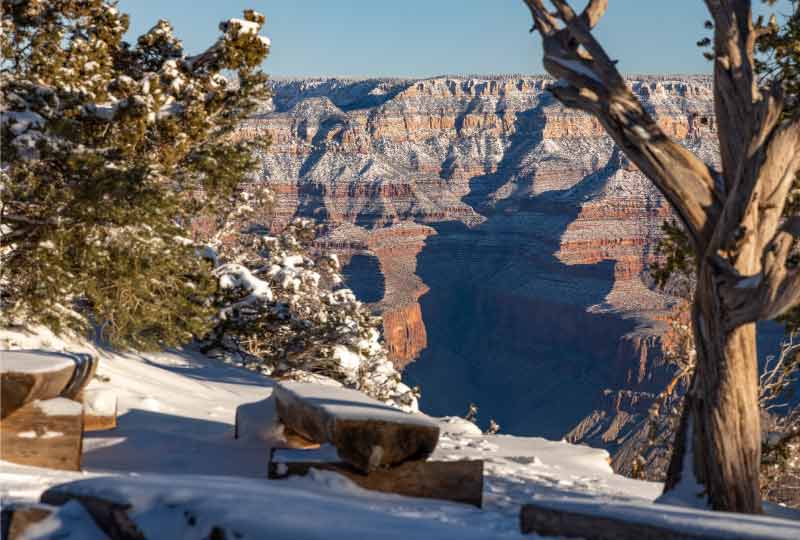 A small amphitheater sits empty this morning. Behind it, the North Rim looms large some eight miles distant.

A crowd has begun to form at Mather Point, and a group of children excitedly catch their first glimpse of the canyon. Vishnu Temple pierces the skyline in the far distance.

Around the corner, the Hopi House (1905) stands picture-perfect. Mary Colter modeled it after the 1,000-year-old pueblo dwellings in the Hopi village of Oraibi. 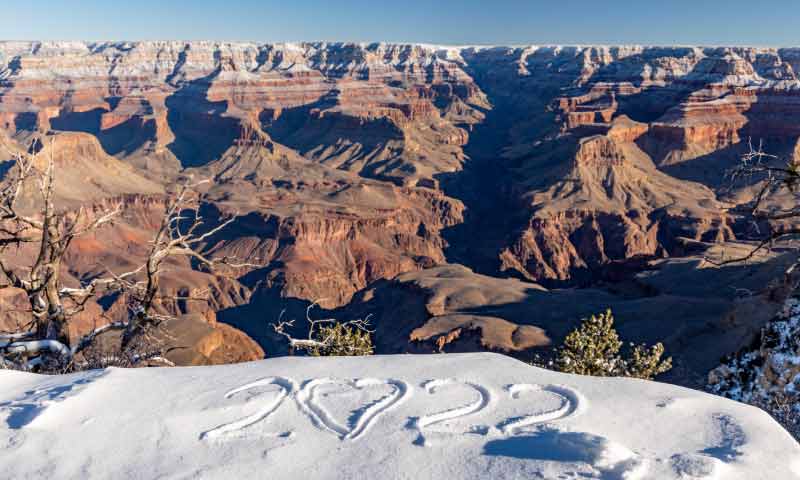 A visitor’s intention for 2022 sketched in snow, soon to melt into a timeless landscape. For the canyon, it is one more year among many, many others.

“Long may the visitor loiter upon the verge, powerless to shake loose from the charm, tirelessly intent upon the silent transformations until the sun is low in the west. Then darkness falls, and should there be a moon, the scene in part revives in silver light, a thousand spectral forms projected from inscrutable gloom; dreams of mountains, as in their sleep they brood on things eternal.”